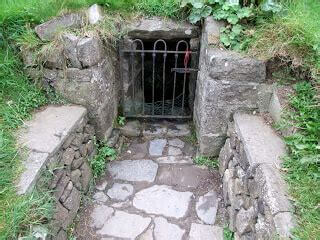 I recently visited a local Sacred Well.  Unlike other Holy Wells in Connemara, this one is no longer visited for a ‘pattern’ or for a saint’s day.  It is largely forgotten and ignored and as far as I know, I am the only person who visits it.  I go to it for a number of reasons, not least because it is SO beautiful, so magical and so neglected.  I love opportunities to connect with the land in different ways and to connect with my ancestors and visiting a well like this enables me to do those things. 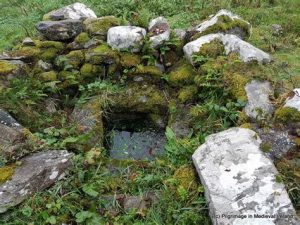 There are Holy Wells all over Ireland and the majority are associated with saints and their healing powers.  One holy well might relieve headaches and another holy well might relieve blindness or stomach aches or some other ailment.  Almost every well in Ireland has a tree close by, more often than not Hawthorn but you might also find Ash, Holly and Oak. If the well had a reputation of offering healing and was associated with a saint, people would perform a “pattern” – a ritual walk around the well saying prayers.  The people would walk deosil or sunwise as they prayed and made offerings, perhaps a coin or something else precious to them;  and if they had a problem with their health, they would wrap a rag or cloutie on to the tree close by.  This little rag symbolised the ailment they hoped would be healed and as it rotted away, so would their ailment go; or perhaps they might leave rosary beads or a holy medal tied to the tree as an offering.

It has saddened me very much when I have seen plastic tied to a tree.  Once in Meath, close to the Lough Crew monument, there was a stand of Hawthorn trees covered in clouties made from black bin bags!!!  Obviously a group of people used something handy – perhaps a black bin bag from a coach on tour – but to my mind this was totally disrespectful to the trees and to the spirit of the land as well as to the Goddess that the monument celebrates.

In Irish mythology there are several tales of magical wells.  One of the most well known is in the cycle of tales about the Fianna, a band of warriors led by Fionn Mac Cumhail.  The story tells us that a Hazel tree, (that was the first thing to exist in the universe and contained  all the knowledge within the universe), was growing close to a well known as an Tobar Segais – The Well of Knowledge.  This was because hazel nuts would fall into it.  A beautiful salmon lived at the bottom of the well and had eaten some of the nuts, consequently becoming the Salmon of Knowledge.  By accident or perhaps it was fate(?) Fionn tasted the salmon and was immediately filled with all of the  knowledge of the Salmon, the Well and the Hazel tree – you will have to read the story for yourself!

Another story tells of Bóann, a young goddess who wondered why she was not allowed to go to her husband Nechtan’s Well of Inspiration.  No one was permitted to visit this well apart from Nechtan, (it being the same well where the Salmon of Knowledge  had lived) as it could be dangerous to approach because the water would gush out and cause injury.   Bóann decided to break the taboo because she knew that this well was the Source of All Wisdom and contained the Mother River of all the rivers of the world.  She approached counterclockwise and the waters of the well rose up and burst out becoming the mighty Rover Boyne, washing Bóann down to the sea.  There are other endings to this story that you may like to search out. 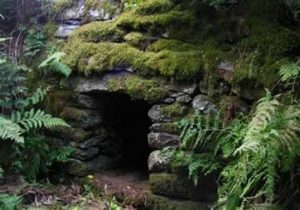 There is a similar story about the River Shannon, the longest river in Ireland.  Another young goddess, Sionnan also went to visit the Well of Inspiration and when she lifted the lid of the well, the waters gushed out, flowing rapidly and drowning Sionnan.  The rapidly rushing water became the River Shannon. These young goddesses did not die though, they were transformed through the knowledge they obtained and became immortal. 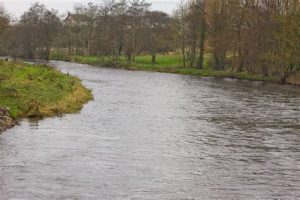 For the ancient Irish, Water was a sacred element.  It flowed through rock and opened the earth and it was believed that it must have magical powers and the ability to connect this world with the Other World.  The people then, knew of course, that water was life and that water was healing.  After all, we began life swimming within the womb and without water our worlds, inner and outer, would not exist.  Water is the universal solvent so it can dissolve rock and metal, it can wear away large areas of land and can evaporate into steam or fog, seemingly to disappear.  Water can hold memories and perhaps that is why the Sacred Wells are so important, as they connect us to a past when we knew the Earth was alive and so were the trees and the plants and the stones and of course, Water itself.

Water has been used since antiquity to cleanse and to bless, to purify and renew, to wash away and release.  We can tell our problems to a stick or write them on a piece of paper our and let it go in the water.  As it is washed away to the sea, so is the problem washed away.  This is a very therapeutic ritual.  The element of Water is associated with the Moon and many of us can feel the pull of the moon, at certain times, affecting our emotions.  Perhaps this is because Water represents our emotional body which should be flowing freely rather than becoming stagnant and causing us harm. By tuning in to our watery side we can release negative emotions and restore flow to our psyche.  Speaking of the psyche,  Water connects us to our deep unconscious – the place where our souls know everything,  In ancient Ireland poets connected to the element of Water for creativity,

“…the place where poetry was revealed was upon the brink of water..” (John Matthews.) www.hallowquest.org.uk/  Those liminal places, shorelines, river banks, by the side of a lake (or by the River Boyne – above) were the places where three elements came together – Air, Earth and Water – and created a magical place of otherworldliness and inspiration.

On the Celtic Wheel of the Year, Water is placed in the West at the Autumn Equinox.  According to Tom Cowan,  wp.riverdrum.com/?page_id=6 “…water runs downward into the Earth, like the setting sun…(it) seeks its resting point as the sun seeks its evening rest below the horizon”.  The Equinoxes represent balance and at the  Autumn Equinox, Water represents balance as it finds its level in any container. The  Autumn Equinox is a time when we can experience balance as we take time to reconnect with our deep inner selves.

As Water is indeed a Sacred element I would encourage anyone to remember that and to bring that sacredness into the mundane.. Bless the water before drinking or using for cooking and contemplate gratitude because water IS life.  When you wash or bathe bless the Water with thanks for its cleansing and purifying, soothing and rejuvenating qualities.   Be mindful of how many times a day you use water and give thanks.  Can you show your appreciation by cleaning up a beach or riverside?  Spend time with a favourite body of water and see if you can sense the spirits that reside there.  Can Water tell you anything you need to know – after all it has been used for divination throughout history.  If you have access to a well or to a spring, revive the custom of decorating it with flowers and leaving votive offerings such as coins or a gift from Nature such as a pebble or shell.

In these troubled times I will leave you with some words of wisdom from the Irish poet and philosopher, John O’Donohue, www.johnodonohue.com/

“Water enjoys freedom.  It disperses itself evenly wherever it lies.  There are no entanglements or nets at the heart of water.  It does not know the conflict and contradiction of differentiation.  Sometimes the presence and effect of friendship and love is like the dissolution that water brings.  Love unties and dissolves whatever is caught, hardened or entangled.”